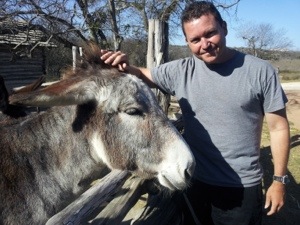 30 production days later, this beast is has been put to rest. 16 flat tires, multiple horse incidents and assorted broken gear complimented this rollercoaster that took us all over the Lone Star state.

My bag-centric approach proved to be the right call, many locations were not cart-friendly and being able to jump in a creek bed at a moments notice was a blessing. We remoted a sharkfin and a helical most of the time and I used my other sharkfin for my boomer’s IFB. A Comtek BST 72-216 fed the director and both cameras scratch tracks for dailies. We hung my Lockit on the Epic and the Red One used as B-cam had a non-functioning timecode port, so all it’s footage will have to be hand sync’d. Have fun with that!

My PSC RF Multi SMA bit the dust the first day, replaced it with an Octopack and never looked back. My UH400A that we used on Zero Charisma for booming began having range issues, so it needed to hit the Mothership and we used a UM400 and a phantom box to get by.

More gear fun… We were doing a daytime campsite scene, I glance down and smoke is drifting up lazily from the antenna port of my Comtek base station. I yanked power (it was connected to the genny) and pulled it out, smoke continuing to come out for the next couple of minutes. Sigh. Another toy heading back to home. I had a portable Comtek tranny available to limp us by.

Other than a couple of broken wires, that was the last of the gear accidents.

This was a challenging shoot, largely due to the use of the B-Cam, lots of wides and tights were being used. We were also constantly chasing the light, as the days are a lot shorter this time of year.

Overall it was a fun crew, we had our laughs when we could and we’d get a game of Ninja in whenever possible.