Blammed through a fun little spot today for Shiner Brewery, promoting their latest effort “Wild Hare Pale Ale”. This was another Fueld Films joint, my fave production company here in the ATX. I realized during the shoot that this was my 2nd anniversary with them, an early 2010 Golfsmith commercial being my inaugural effort. One little diff with this one was the need to record VO for both the spot and for radio. Feeling pretty certain that finding an acoustically friendly locale on set would be unlikely, I decided to prep my new vehicle to be the VO booth. Having walled off and insulated the front half when I had Third Coast Vans do some aftermarket alterations made for a pretty decent initial setup. In addition, I put a panel of Auralex-ish stuff behind the mic and blanketed any reflective stuff. I threw a headphone amp and a few pairs of cans, yanked my bag off the cart and we were ready to roll. It was a really windy day outside, but you couldn’t tell inside. We only had to pause for really noisy stuff like motorcycles or airplanes. We had veteran Dallas actor Sean McGraw as our talent today and he was a machine. Hat’s off to ya, mister. All three spots can be viewed here. 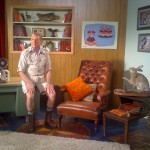 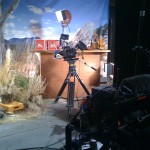 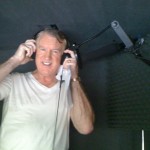