Spent a REALLY cold few days in Laramie, WY, getting more interviews for the doc currently titled Jump Shot. It’s about the life of Kenny Sailors, a 94 year old man who is credited by some as the inventor of the jump shot in modern basketball. He has a life resume that reads like a Dos Equis spot. It was -18 at one point. 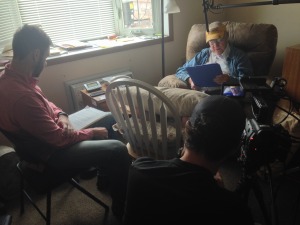